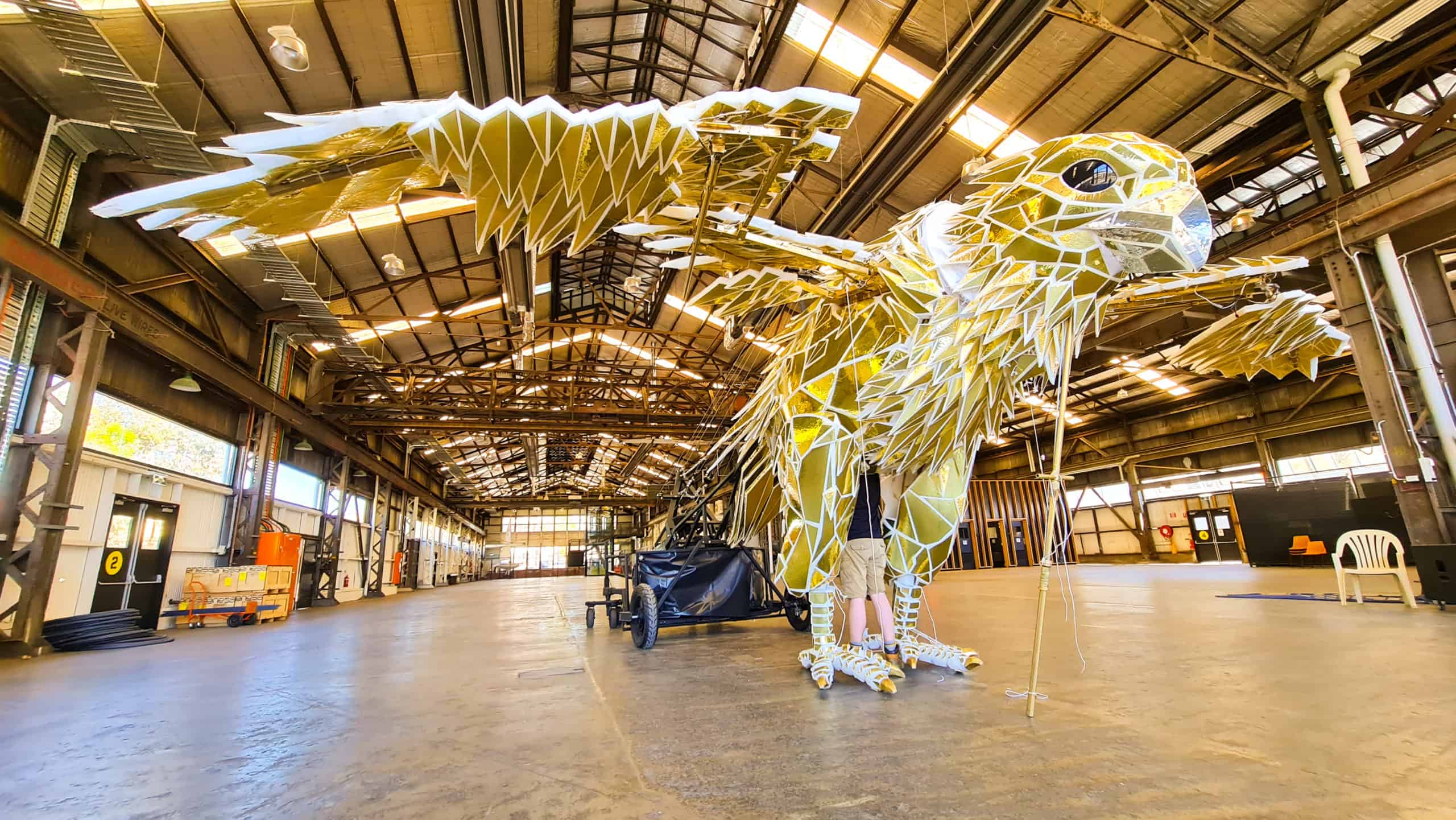 The Falcon is our biggest and most advanced puppet yet. This project was designed and built by A Blanck Canvas for David Atkins Enterprises and featured at World Expo in Dubai.

The falcon represents strength and heritage and is the national emblem of the UAE. Our puppet was coated with gold to celebrate 50 years of the UAE for the Golden Jubilee.

Due to the importance of the Falcon to Emirati culture, we designed the puppet to be stately and embellished. It proudly stands 4 metres tall and almost 5 metres long, having a total wingspan of 10 metres.

This giant puppet was intentionally made to be in the same realm as The Guardian, sharing similar features and celebrating those signature sharp angles. The build and materials used are quite similar, though the techniques and mechanisms applied to the Falcon are much more advanced since building the Guardian back in 2019.

The Falcon was exclusively made in our Melbourne workshop. Its main components consist of a fibreglass and steel internal frame, a hand carved EPE foam body with stylised layered feathers, an in-house custom engineered gold vinyl wrap and a scenic paint job. The puppet is complete with programmed light shows and soundscapes.

The Falcon is operated by eight puppeteers and our signature boom-arm chassis. The chassis has five levers that operate the bird’s body and head that allows it to tilt and rise. The levers also activate the tail feathers to fan in and out, as well as controlling the wings that are automated to flap using motors and electronic mechanisms.

Each leg is puppeteered and can produce convincing bird-like walking and hopping movements, that when in motion allow the claws to create a passive curl. The claws also have trigger mechanisms that open and close. This helps to convey realistic movements, especially when the bird is in flight mode and the claws would naturally be clenched.

It took weeks of studying a falcon’s movements and mannerisms, and we particularly wanted to create the wing movements to be as convincing as possible. To do this, we studied their skeleton to understand how they moved, and what important joints were needed to be replicated. The puppets wing capabilities allow it to extend, flap up and down, as well as fold in (like a chicken), while flapping in this position too if required.

The Falcons head can also be puppeteered using a large rod with a trigger mechanism, this articulates the beak to open and shut when essential.

Thousands of LED RGB pixels have been used throughout the puppet. Multiple pre-programmed light sequences are available to be activated; the longest lasting 34 minutes. These complex light sequences have been programmed to play in conjunction with unique soundscapes, including four short sound-bursts that can be activated wirelessly. E.g., squawks, bird calls and other sounds.

The Falcon performed over 400 shows during January to March 2022.