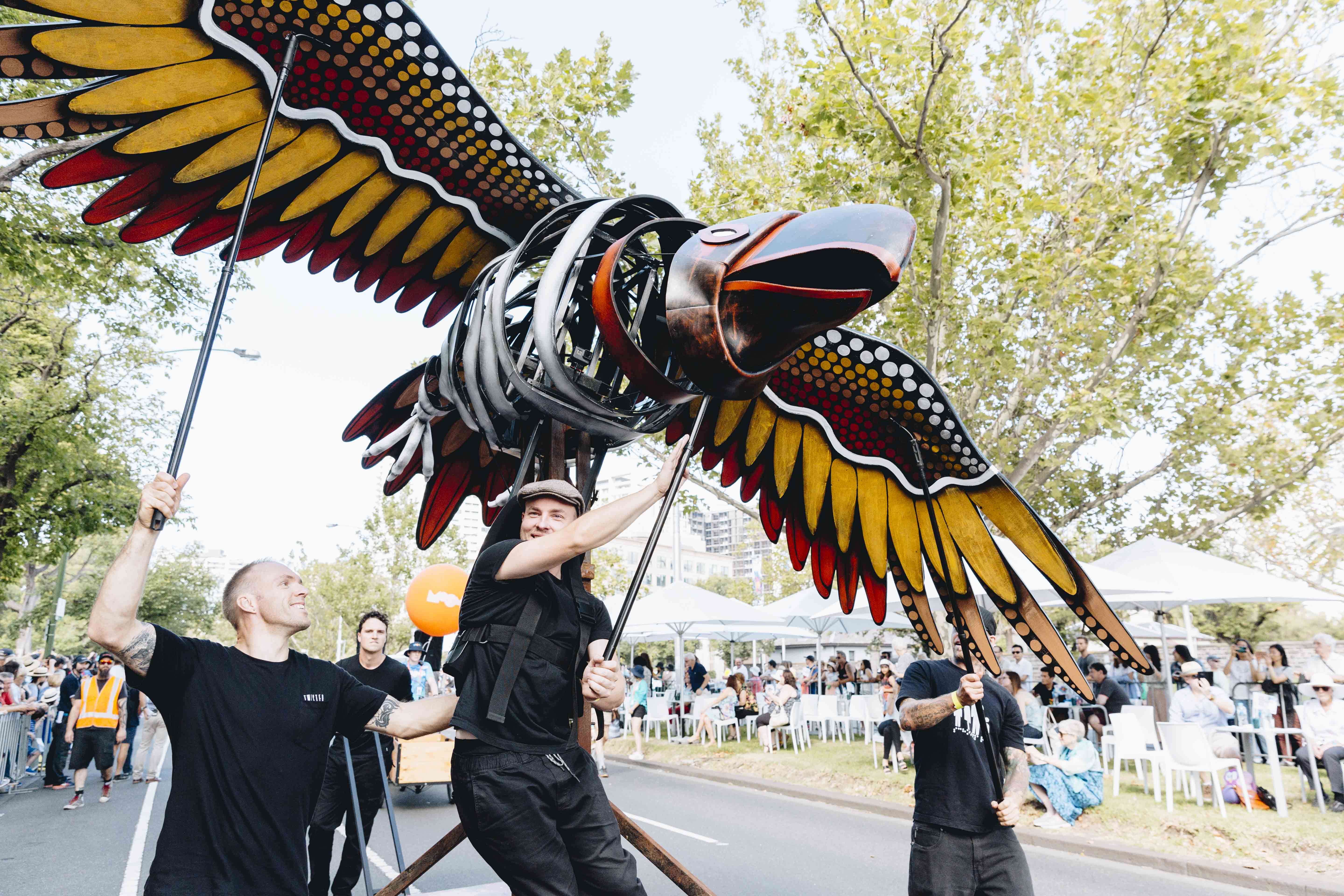 Moomba is the largest running community festival in Australia and is held in March every year in Melbourne. The four-day celebration regularly attracts up to a million people with a highlight being the Moomba street parade which features large floats and puppets. We have had the pleasure of being involved in Moomba since 2017 and have built several large puppets for the parade for City of Melbourne.

This furry eight legged, eight eyed, creepy-crawly is another large new puppet we designed and built for the inaugural Moomba Parade. It was based on the Maratus Nemo, a newly found dancing peacock spider that was discovered and named by Museums Victoria’s very own arachnologist Joseph Schubert.

Celebrating the exciting discovery of this little guy, as well as the incredible work Museums Victoria do, we met with Joseph to ensure we did the spider-turn-puppet absolute justice. Usually, the tiny arachnid is the size of a grain of rice with a vibrant orange and white striped face, alike to the famed clown fish from Finding Nemo (hence the name Nemo).

The 3.5-metre-tall peacock spider is an inflatable suit puppet operated by one puppeteer. It is made with lightweight custom engineered framing, that connects both the 3-metre-long legs and custom-made inflatable bladder, which too is covered with treated faux fur and embellished metallic eyes. The puppet has also been scenically painted and has an inbuilt engineered system that controls the air pressure and camera that allows the puppeteer to see its surroundings via the cameras outside feed.

Meet the three amigos, Bubbles, Chops, and Frankenstone. The Royal Children’s Hospital and Children’s Cancer Foundation funded these magical works as part of an Art Therapy program. Children were asked to design a creature’s best friend, and 12-year-old Isabella won with her charming Puppy drawings; “clearly a puppy makes a best friend in all the world!”.

The three furry puppies were made from an inflatable body bladder, combined with a hand sculpted foam head and arms. The puppeteers wear a custom-made backpack which secures the fan and batteries, allowing it to constantly inflate.

We also secured a camera and feedback display unit that allows the puppeteer to have optimal viewing control of their surroundings.

The Mosasaurus was designed by Joseph, a 12-year-old future palaeontologist. This little legend put pen to paper for Moomba’s Design-a-Float competition and his design was 1 of 7 that were successfully chosen from thousands of entries to be made into glorious floats.

Often mistaken as a dinosaur, the Mosasaurus is actually an aquatic lizard that lived 70 million years ago. The 12.5 metre-long, 4-metre-high inflatable pre-historic creature is operated by 8 puppeteers, along with manoeuvrable flippers, body, and jaw mechanisms.

It took over 30 hours alone to heat treat the creature’s skin. This initial foundation is what gives the Mosasaurus its remarkable textured reptile exterior!

Each year Moomba holds a competition for children to design their own float. Six winning entries see their designs as giant-scale floats parading down main streets of Melbourne. In 2019 one of the winning entries was 9 year old Raf who designed the multi-tooled, junkyard robot M.O.T.I.F an acronym for Made of Things I Found. We were provided with the original sketch from Raf and based our design and build on his original drawing.

M.O.T.I.F was operated by 10 of our talented puppeteers and received lots of cheers at the Moomba Parade. Raff lead his robot down the street with a custom made robot remote control and we were told it was the best day of his life so far!

The Perfect Peacock was based on a winning children’s float design entry. Izzy was 10 years old when she designed this beautiful peacock puppet with extendable tail. We were provided with the original sketch from Izzy and based our design and build on her original drawing.

Izzy came into the studio to see her peacock being built and received a tour of the studio. The final peacock was approximately 4 metres high made from scenic painted sculpted foam and hand cut material  to resemble feathers. It was operated by one internal performer and three external puppeteers on its magnificent and vibrant 4 metre extendable tail.

Wah the Crow and Bunjil the Eagle took the form of sculpted foam rod and roving puppets for Moomba 2017.

The two puppets led the parade with the Welcome to Country Ceremony performed by local Wurundjeri Elders that have continued to lead the  parade each year.

The dream time puppets are painted in striking patterns customary to the Traditional Owners of the land, the Boon Wurrung and Woiwurrung (Wurundjeri) peoples of the Kulin Nation.