Airena is bringing the giant inflatable installation, Unicorn Skull to Puppet Mayhem. Made right here in their studio run by Felipe Reynolds, at Seaworks Maritime Precinct.

Felipe Reynolds has worked internationally as a Set and Costume designer for Opera, Theatre, Dance and Television. As well as designing Blue Chip and Community Events some career highlights are renovating the historic art deco El Rey Theatre in Los Angeles and resident designer at Tiroler Landes Theatre in Innsbruck, Austria.

He has designed and fabricated the current touring show for Circus Oz” But wait there’s more” and recently designed a Giant Inflatable Stage for the Opening Ceremony for the Asian Cup and a Giant Inflatable Puppet for the Cricket World Cup. For 7 years he worked as the designer of inflatable components for large scale animatronic creatures for Creature Technology Co. and Global Creatures. Developing and making puppets for such world acclaimed productions as Walking with Dinosaurs Live, How To Train Your Dragon Arena Spectacular and the World Premier of King Kong the musical. Most recently he designed and made an articulated inflatable body for the Bear mascot for the Sochi Olympic Opening and Closing Ceremonies. Radio City Music Hall, Lady Liberty Puppet for the Heart and Lights show to open 2015.

He has also had fashion editorials of his couture work in Tangent and Cause Celebre magazines. 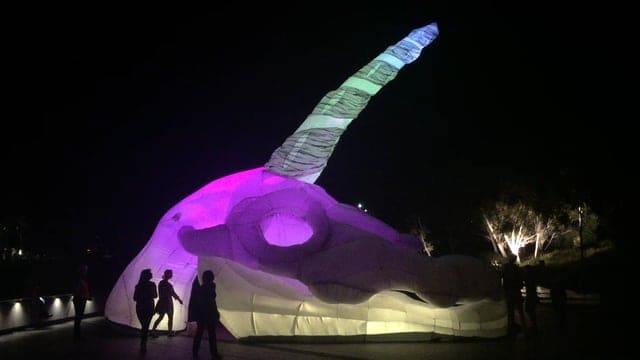